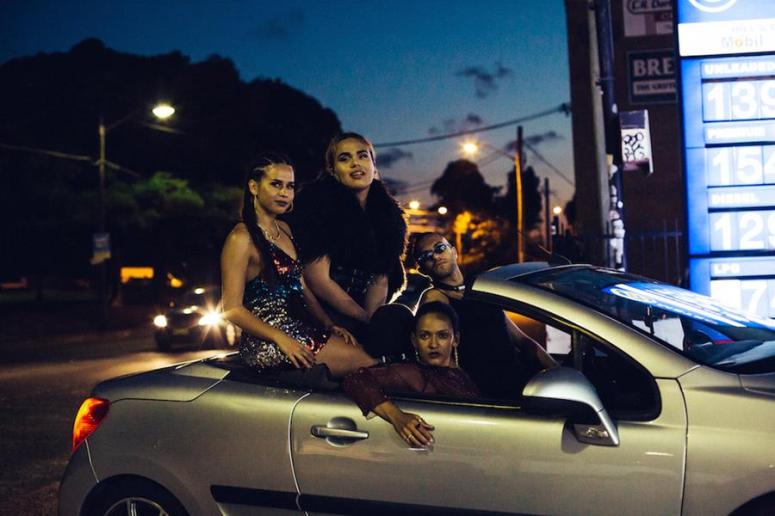 The First Lady of Trench Records, Miss Blanks, has launched into 2018 like a heat-seeking missile with the release of the baller new video for her track ‘Haters’.
Taken from her critically acclaimed debut EP Diary Of A Thotaholic (D.O.A.T.), ‘Haters’ features Miss Blanks dropping bombs and calling out all her detractors, along with a crushing verse from fellow Brisbane emcee Aywin, over a tomtom cooked beat.

Directed by Aislinn Lowe (Oliver Tank – ‘Swerve’), the video sees Miss Blanks and her clique makin’ trouble and cruising the streets in a top down convertible, with both Blanks and Aywin delivering blazing verses to camera while snapping mugshots of punks giving her attitude throughout the dingy, dark corners and night spots of Sydney’s inner west.
Speaking of ‘Haters,’ Miss Blanks says the composition all flowed out easily, but the spice added by Aywin took it to a new level. “After working on the beat with tomtom, it was a no-brainer that this track was going to go HARD, but it needed some additional flavour to make it even bigger and that’s where Aywin comes in. I don’t believe there’s anyone else in Australia right now that has her cadence, energy, delivery and vocal stylings.”
She adds though, that the song is inspired by a degree of discomfort and that she needed to channel that pain and anger into the video as well.
“It was important that I/we channeled everything that was being felt at the time into the track and then also for the video. I think when creating the track, I had so much anger inside of me for all of these people that did me wrong in the past and presently, but moving into 2018, I had to also look at myself and what I was doing to me that was also essentially self-harming/hating. Haters is a screw you to all the bad people out there that are trying to bring you/others down and a reminder to ourselves not to bring ourselves down.”
Diary Of A Thotaholic’s release in November was met with triumphant applause from across the media landscape, including triple j, SBS Viceland’s The Feed, Rolling Stone Australia, ELLE Australia and The Music, just to name a few.
Her spectacular live show has only gone from strength-to-strength in the last six months too. After establishing herself as the breakout star of Bigsound 2017, she’s since gone on to perform at Listen Out, Meredith, The Plot, Let Them Eat Cake, and Beyond The Valley, and is now poised to rock the Laneway 2018 line-up, along with her own debut headline national tour shows.
Since debuting her music in September 2016, Miss Blanks has quickly established herself as one of the most important new voices in Australian hip hop. With fire rhymes, hot style, and a stage presence like no other, she is blowing up the scene in a way that’s too loud for the mainstream to ignore.
It’s not only her music that’s being championed either, with Miss Blanks being recognised as an activist, having given talks in London for TED and in New York at NYU, as well as being named one of Spotify’s faces for their 2017 marriage equality campaign. All the while serving up an unapologetic rawness in all aspects of her career.
Her upcoming headline tour will see her perform shows in Brisbane, Melbourne and Sydney towards the end of January, before she embarks on the massive Laneway Festival touring line up, early next month.
2017 was the year Miss Blanks established her name. 2018 will be the year Miss Blanks establishes her reign. As she says herself, “While 2017 was cute, 2018 is all about making it my bitch.”
DIARY OF A THOTAHOLIC IS OUT NOW VIA TRENCH RECORDS
MISS BLANKS 2018 TOUR DATES
Tickets and info for headline shows available at missblanks.oztix.com.au