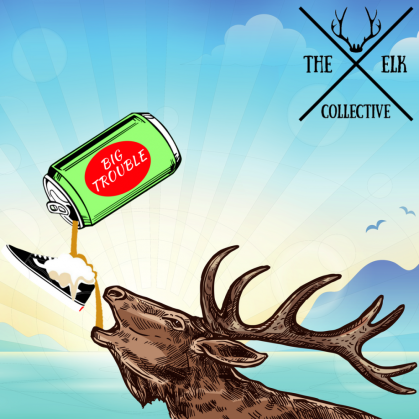 The Elk Collective have come together to create a sound that is nostalgic and some what reminiscent of early 90s hard core on their debut EP ‘ Big Trouble’.  The band claim to be jokers and an ‘all-bullshit band’ but there is nothing bullshit about the debut EP from the Sydney band.

The self- confessed ” essentially two mediocre vocalists trying to cover up their lack of talent with jokes and an amazing drummer”  have succinctly described their sound so there are no surprises here as to what to expect.

With ‘ Chokkas’ the band live up to their own description with exceptional drumming the real stand out here. Dirty vocals are in your face for sure, however there has to be a mention of the exceptional guitar that is going along in the background.  Its more subtle than the powerful drums, however it does rate a mention.

Third track “Moshpittin on your Toenails” tricks you into thinking that it might be a little slow with a nice melodic intro, but then slams right into killer drums and takes off running. This is the quintessential mosh pit song and the licks just make you want to smash into things at full pace, hoping not to hurt yourself but OK if you do.

“Muscle Up Buttercup” is a prime example of how the band manage to blend the dirty gritty vocals of Matt and work them in with Dwayne’s more melodic voice, creating the perfect balance. Its reminiscent of early Butterfly Effect, yet manages to remain current and expertly layered, whilst maintaining an element of melodic harmony in the guitar work.

Whilst the EP has that nostalgia feel there is a lot of brilliant guitar work going on here  the band have kept production simple – which is nice. You get the feeling that the band don’t need the bells and whistles of loops, layers and delays. Anything too fancy would detract from the raw authentic sound that they are creating. To see them play live you would more than likely get the exact sound that you hear on the EP and this is a refreshing change to some of the music that is out there.

“Big Trouble” sticks to six short and sweet songs, enough to whet your appetite and is a nice offering from the Sydney band, giving listeners a keen eagerness for more. By the time the EP comes to a close you’ll be about ready to chuck on a black shirt and flanno and head out the door to let out some energy in the nearest mosh pit.

‘Big Trouble’ is out Friday March 16 (and available for pre-order now on iTunes!) and single ‘Moshpittin’ on your Toenails’ is on Spotify right now. For more information, go to facebook.com/theelkcollective