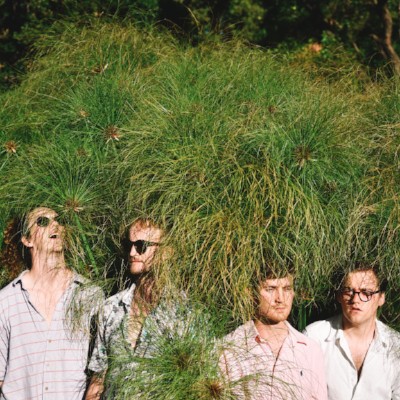 We may only be three months into 2018 but for Adelaide’s Neon Tetra, there’s no time to waste when it comes to rolling out some new music. Continuing to finesse their combined love for groove, funk and soul music, the four piece have produced a beauty in new single, ‘The End Begins Again’.

Taken from their forthcoming EP Pollen, ‘The End Begins Again’ shines with synth-pop grooves. Josh Allen’s vocals soar, while the ever-present saxophone you heard from the onset of the song provides a lush sound that throws back to golden days of late 70’s, early 80’s pop. A natural progression for Neon Tetra, who spent 2017 impressing with refined sounds displayed on the catchy ‘Reflections’, ‘The End Begins Again’ is the perfect companion single to the band’s last dose of infectious hybrid synth-pop.

Ever evolving, Neon Tetra have been taking each opportunity to improve on their craft with both hands. 2017 proved a fruitful one for the band, as they landed lucrative support slots alongside the likes of Ecca Vandal and The Belligerents, while in March, Neon Tetra were selected to support UK superstar Robbie Williams in front of thousands in Adelaide. It’s this early momentum that Neon Tetra have taken with them into the studio over recent sessions and the vibrant energy the group has brought to their songwriting is felt no stronger than on this, the first single from their anticipated Pollen EP.

Music such as this, rich in soul, optimism and an undeniable beat to entice crowds anywhere out to a dance floor, is music that teems with longevity. With ‘The End Begins Again’, Neon Tetra are putting another strong step forward and building up to an EP release that will have the group from the City of Churches further expanding their output and more importantly, bringing it to a venue near you soon.