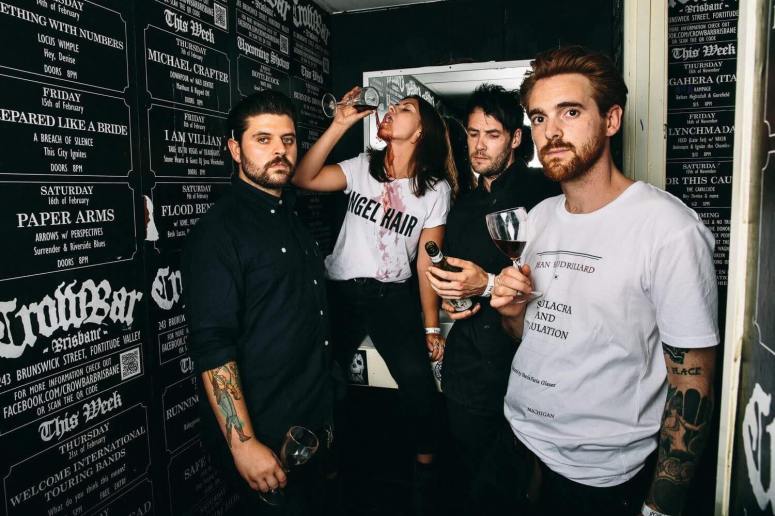 Melbourne-based blackened rock’n’roll band PAGAN have today unleashed their new single ‘Death Before Disco’ together with the announcement of their single launch (a party aptly titled the Holy Communion) going down in Melbourne next month. Premiered on triple j’s Home & Hosed last night ‘Death Before Disco’ is the first single in 12 months from our resident occultists, and the first cut from their to-be-announced debut album due out this year on newly inked label EVP Recordings.

Listening to ‘Death Before Disco’ with the volume up is a non-negotiable. Vocalist Nikki Brumen’s goosebump-inducing vocals brim with anger and tightly packed emotion, bringing to life the stacked guitar parts of Xavier Santilli, trembling bass and backing vocals of Dan Bonnici and absolute thumping drums of Matt Marasco – who makes it sound possible to be in four places at once. It’s intricate, it’s deafening and it’s large. Pagan have come together to write a song that is played with such unstoppable ferocity that they not only sound like a band on a mission, but a band that’s at full-blown war.

To celebrate the release of ‘Death Before Disco’, PAGAN are doing what they do best – putting on a party. They’ll be taking over the Northcote Social Club on Saturday April 20 for The Holy Communion with their friends Ferla, who make smooth, solitary sad-bangers that could just as easily soundtrack a solo walk home as it could a slow-dance, indie-garage-pop band LOOBS, Lost Talk, 4 piece garage/punk/pop/whatever-else-inspires-them-that-day band Bad Batch, and Hayley Mary from The Jezebels – your Holy Communion resident DJ who will soundtrack all of your slow dance and body-of-Christ-ingesting needs. This will be Pagan’s first ever headline show in their hometown of Melbourne and to celebrate the occasion we’re asking all guests of this Holy Communion to please wear white.

Embracing their Italian roots in an almost sarcastic fashion until it’s almost become serious, Pagan have charmed audiences with their unique candour and straight-up saucy attitude since forming in 2015. The past 18 months have seen them play coveted spots on UNIFY Festival, Yours & Owls and BIGSOUND, plus tour their blistering live show across the country with the likes of King Parrot, Clowns and most recently Rise Against this past February. They have baited us with a string of single releases including the “thunderous” (The Music) ‘Good Grief’ and ‘Imitate Me’, which was released after the band were named Feature Artist on triple j Unearthed. Last year Pagan announced a signing to worldwide label EVP Recordings and we can confirm that they have recently emerged from the catacombs hand in hand with long-time producer and friend, Mike Deslandes (High Tension/Harmony/The Nation Blue) with their to-be-released debut album in tow. But we’ll have more to tell you about that soon…
Pagan – ‘Death Before Disco’ [Single]
out now