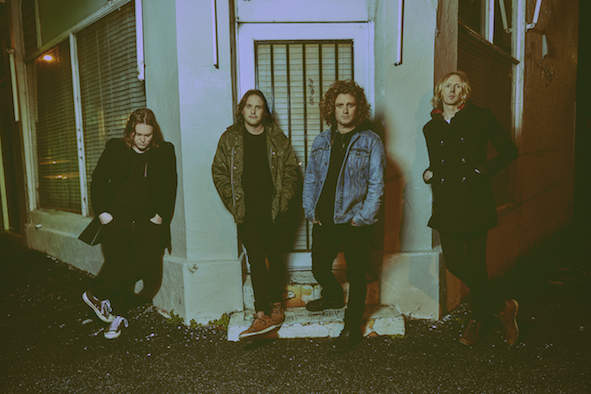 Less than a year since the release of their latest album, the explosive Forgetting The Future, British India are thrilled to announce they’ll be returning to stages around the country in May and June on the Midnight Homie Tour that will kick off in Bendigo on May 11 and continue through regional and metropolitan cities in Victoria, New South Wales and Queensland, before finishing up at The Gov in Adelaide on July 6.

With raging guitars, seriously provocative lyrics and a palpable energy that confidently struts through the track’s entirety, there is little wonder Midnight Homie has quickly become a fan favourite on the album and the live stage. It was twisted alt-rock warlord Lou Reed who once said, “My week beats your year”, but British India have upped those stakes on their new single, touting, “My night is better than your whole life.” Armed with the precision rock stylings of the new record, plus a bulging back catalogue of Australian live favourites – think Hottest 100 dominating tracks like Vanilla, I Can Make You Love Me and Suddenly – Australia’s most loved indie rockers are here to prove the snarling intention behind that arrogant claim.

The song’s themes are portrayed through striking animations in the Midnight Homie lyric video, highlighting career-best lyricism from vocalist and lyricist, Declan Melia; it is introspective yet has the relatability to resonate with the masses. Watch the ‘Midnight Homie’ lyric video here Forgetting The Future is British India’s sixth studio album and its innovative direction has been met with widespread applause, including leading the band to sign an international licensing deal with NYC indie label, AntiFragile. The LP debuted at #12 on the ARIA Albums Chart and previous singles, My Love and Precious were both added to high rotation on triple j, with My Love also scoring the most played track on Triple M in its first week.

Over the course of their impressive career, British India have earned four Top 10 ARIA albums, eight entries into the Hottest 100 and their classic single I Can Make You Love Me is accredited Gold in Australia.

Be sure to catch the legendary Melbourne rockers doing what they do best on a stage near you this May and June.

Tickets to the national tour are on sale now.

FORGETTING THE FUTURE IS OUT NOW THROUGH LIBERATION RECORDS