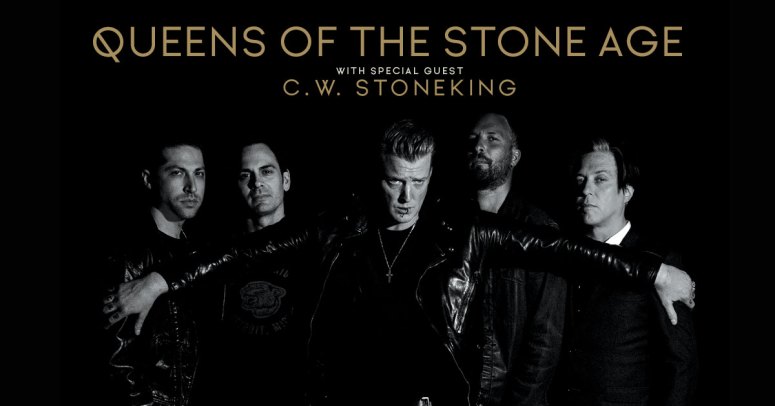 Queens Of The Stone Age will return to Australia and New Zealand on their Villains World Tour, performing nine huge headline shows for Frontier Touring throughout August and September. They will be joined at all shows by Australian blues maestro C.W. Stoneking.

‘Queens Of The Stone Age, you beautiful bunch of freaks. Rock’n’roll just doesn’t get any sexier than the sounds this band lovingly wrench from their instruments and these skillful players perform with a synergy that proves they’re a band of brothers who genuinely rate each other.’ – The Music

From there, the rock’n’roll legends will perform a second New Zealand date at Christchurch’s Horncastle Arena, before landing in Australia to perform shows in Brisbane, Newcastle, Sydney, Hobart, Melbourne and Adelaide closing out the tour at Perth Arena on Wednesday 12 September. These shows make good on Homme’s promise made while on our shores last year of returning before too long:

“Everybody who knows me knows that Australia is my home away from home.”
– Josh Homme

Tickets to all dates go on sale on Thursday 3 May – head to frontiertouring.com/QOTSA for all of the details.

Featuring fan and radio favourites ‘Head Like A Haunted House’, ‘The Way You Used To Do’ and ‘The Evil Has Landed’, Villains was named #8 on Rolling Stone’s ‘50 Best Albums of 2017’ list and debuted at #1 on Australia’s ARIA Album Chart.

C.W. Stoneking, the embodiment of what some would say is a bygone era of music, will join Queens Of The Stone Age as special guest at all Australian and New Zealand shows. From his rasping jungle-rock-blues, to his well-oiled locks, and his familiar, though increasingly less frequent, all white clothing ensemble, he has converted fans across the world to his unique style.

Over three albums (King Hokum, ARIA award-winning Jungle Blues and his most recent release, Gon’ Boogaloo), and countless tours both here and abroad, C.W. has delivered his own brand of swampy rhythm and blues via his larger than life persona, incredible musicianship, and epochal performances.

Currently in the midst of wowing fans on a massive USA run and returning to our shores off the back of dates in Japan, Queens Of The Stone Age are not to be missed. Arguably one of the best rock bands on the planet, and armed with their latest rock masterpiece in Villains, these will be the tightest shows you’re ever likely to see. Their 2017 AU & NZ tour completely sold out immediately – don’t delay!